This article was originally published in The News-Enterprise on November 24, 2019

The infield turf con­version of the 12 Eli­za­beth­town Sports Park base­ball and softball fields is underway.

Work on the $2.6 million synthetic turf conversion project be­gan in mid-October and is being completed by AstroTurf, a company based in Dalton, Georgia.

Elizabethtown Tour­ism and Conven­tion Bu­r­eau Executive Director Janna Clark said the con­version is expected to be completed by the end of February prior to the start of the park’s 2020 season.

In 2016, as the park con­tinued to see a big demand to hold events on diamonds, especially baseball, Clark said they’ve realized the struggle with rainouts because of the ability of the fields to recover from rain and what it takes to get multiple fields playable after sev­e­ral inches of rain are received just prior to events.

Clark said the infield is where the majority of the work is required to get the fields game ready following a rain. With synthetic turf, Clark said that process is quicker.

In 2017, they had an economic impact study and held discussions with current and potential sports organizations about the idea of doing the conversion and how that would help them recruit, retain and operate events at the park.

Then in spring 2018, a professional review of park operations, com­ple­ted by Huddle Up Group, emphasized the ove­rall benefit to the com­munity and the sports park’s industry rep­u­ta­tion (less rainouts) for turf conversion.

“We were basically responding to industry feedback and client feedback on how much that would help us,” Clark said. “It’s beneficial to us because of the number of fields we have.”

“The AstroTurf team came in full force and began the project understanding the importance that we are ready for next season. Much like any construction project, the demolition of our beau­tiful fields is hard to watch. But we know the end game will deliver an over­all better experience for all visitors to our park and community. The feedback from the base­ball industry has been overwhelmingly po­sitive,” Elizabethtown Sports Park General Man­ager Todd Yancey said in a statement.

Communications Di­rec­tor Krysta Winstead said it is important to note people in the industry are excited.

“People who play on these fields all the time, they are so excited to not have as many rainouts and to be able to come to play,” she said.

Clark said return on the $2.6 million investment will “come over time.” Tourism budgeted for the project in the 2017-2018 fiscal year when the com­mission investigated the possibility of doing this construction during the offseason of 2018-2019, but opted to wait until the new operations com­pany, Sports Facility Man­age­ment, was selected so they could manage the construction from start to finish.

Clark said they have had about $88,000 in savings through direct purchasing of materials for the project.

Winstead said they are filming the conversion of one of the fields with a GoPro, which they will share with the public. She said it’s a way for the community to feel involved with the project and better understand the process.

Elizabethtown Sports Park averages about 50 events a year. Clark said that brings an average of about 58,000 athletes, who also bring their families. Their average length of stay is 2.6 days.

“When a 100-team baseball tournament gets canceled at the last minute, the impacts there trickle down. It’s the event owner first, then it’s the park, then our businesses. … No one wins when that happens,” she said. 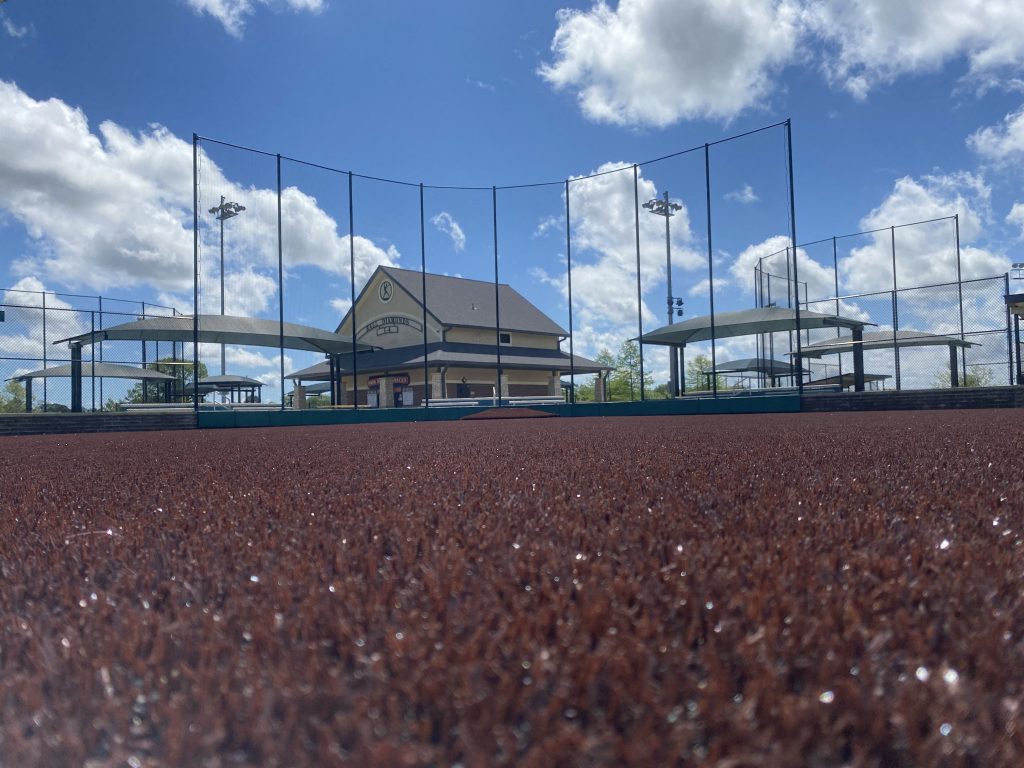